Take a look at the brand new playground at Roundhay Park. FASTSIGNS® Leeds provided printed graphics for the fundraised redevelopment. 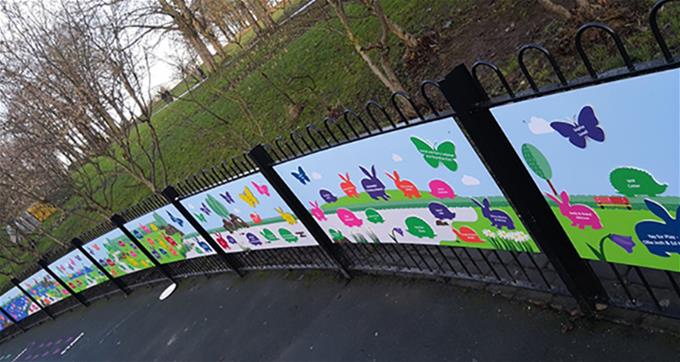 Back in December, we were part of an exciting project that involved refurbishing Roundhay Park’s lakeside playground. The much-loved play park has been transformed, thanks to the valiant efforts of a small community group called The Friends of Roundhay Park.

The project was led by a group of local mums, who the BBC described as ‘mums on a mission.’ They got together after feeling frustrated at the fact the existing play area was old, tired, and not equipped with the facilities for their children to be able to play safely and happily.

Following months of fundraising, the team raised enough to pay for the entire redevelopment. Their efforts captured the support of the local community, including many business owners, and they raised £159,000, more than exceeding their original target of £100,000.

Part of the new park’s design involved a panel display that runs along with the perimeter fencing. It was decided that this would be used to display the names of the businesses and individuals who donated their time and money to the project.

FASTSIGNS® Leeds was asked to produce these panels, which feature a bright and colorful landscape scheme. Overlaid on this backdrop are individual cut-outs of multi-coloured animal shapes, which feature the names of the park’s generous donors. 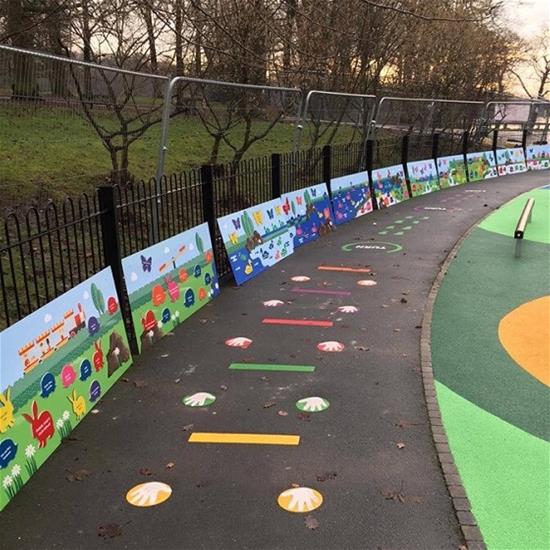 Getting hands-on with production

The boards are printed in full colour and on aluminum composite, with channeling on the back to enable them to be fixed to the fence. We produced the signs and some of the Friends of Roundhay Park came to our workshop to fit the sponsor plaques to the panels. Here’s a picture of them in action and the finished results:

Here are a few photos of a job we did for @roundhaypark playground. We made the #signs and then ladies from the Friends of Roundhay Park (@ForpLeeds) came to us to fit sponsors plaques to the signs.

Once the signs were finished, the installation was completed by Leeds City Council’s parks department. The team was really pleased with the finished graphics and has since requested some boards outlining the park’s history in the same material.

Local councilors and business owners were out in force today alongside the @ForpLeeds Park team of #mums, to #celebrate the opening of #Roundhay Parks brand #new playground! 😃 pic.twitter.com/whHZT5xhco

Here’s what Laura Webb from The Friends of Roundhay Park, made of her experience of working with us:

“From the first contact, Chris (FASTSIGNS® Leeds Co-Director) has been helpful and flexible towards our requirements for this charity project. He offered sage advice on a number of technical elements and worked with us as the idea and designs were finalized".

“His team went out of their way to enable the volunteer team to use an area of the workshop to fix badges to the panels. Their service, value for money, and the finished products were all excellent. I would highly recommend their work, or why not visit the playground to see for yourself?”

The feedback from the local community has been fantastic. The team’s fundraising efforts made local and national news sites, including the BBC and the Yorkshire Evening Post. We’re pleased to have been involved in a project that families from across Leeds will benefit from for years to come.

Got a project in Leeds you’d like to brighten up with graphics or signage? Tell us your idea and we’ll help you make an impact.