See the celebratory signs and graphics installed around Leeds Trinity shopping centre for Leeds United’s league win and promotion to the Premier League.

We’ve spent the past month covering Leeds with celebratory signs and graphics after Leeds United’s historic Championship win and promotion back to the Premier League. 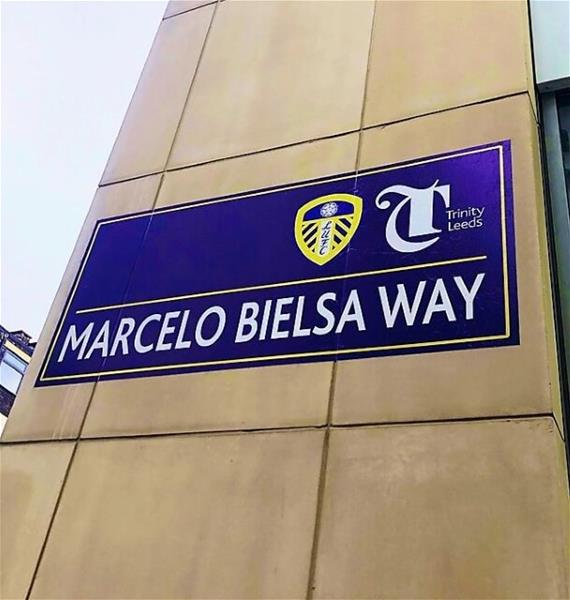 Until July 2020, Leeds United hadn’t won a title since 1992, when they won the final ever “Division One” before it became the Premier League. They were relegated in 2004 and the club’s fans struggled with losses and dashed hopes in the years that followed.

Leeds United has always had one of the most loyal fan bases of any club. This meant promotion celebrations started to sweep across the city as soon as it became clear they were headed for top position and the Premier League next season.

While there were mass gatherings of fans that turned chaotic, there have also been lots of safe and considerate celebrations around the city. We’ve been pleased to be involved in producing graphics at Trinity Leeds shopping centre to commemorate the win.

The road linking Trinity Leeds shopping centre to Commercial Street has been renamed Marcelo Bielsa Way, after the Leeds United manager. Our Director, Andy, was only too happy to see this sign in pride of place!

Inside the shopping centre, we installed these floor graphics:

It's been fantastic to be a part of the celebrations and create graphics for Leeds fans to enjoy. We’ve been working with the Leeds United for years and often provide graphics for their shops and Elland Road stadium.

With the new season starting in September, we’re excited to see what’s in store. From Bielsa buckets to promotional offers, we’re sure there will be plenty of printed graphics to accompany the ups and downs of the club’s return to the Premier League.