Did You Spot These Posters for the Azuma Train Launch?

Did you catch the Leeds Azuma train launch? Take a look at some of the advertisements printed and installed by FASTSIGNS® Leeds.

It’s all go at Leeds Train Station, with works underway to make it more accessible. The South Bank area that backs directly onto the station is also undergoing a major expansion, bringing more businesses, residents, and passengers, so the station’s renovation is much needed.

Set against the backdrop of this development was the launch of the new London North Eastern Railway (LNER) Azuma trains, in May 2019. The new services will run between Leeds and London on the East Coast Main Line, catering to commuters and day-trippers alike. 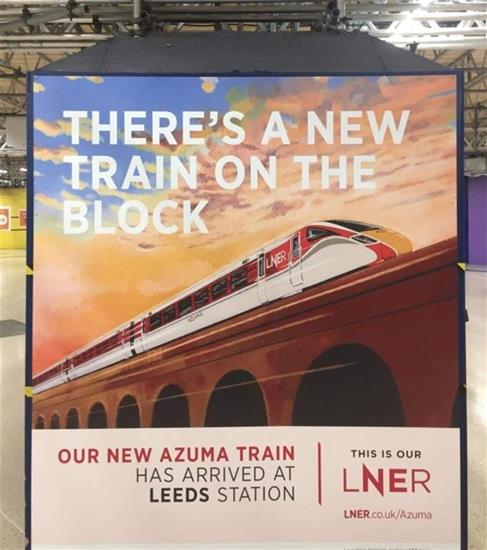 Why was the Azuma train launch special?

Aside from the additional journeys that the Azuma trains will provide each week, the trains themselves gathered a lot of interest.

The high-speed trains are diesel-electric hybrids and have been built by the Japanese company Hitachi, using technology from Japanese bullet trains. LNER plans to roll out a fleet of 65 of these trains and the first one pulled up at Leeds station on 15th May. 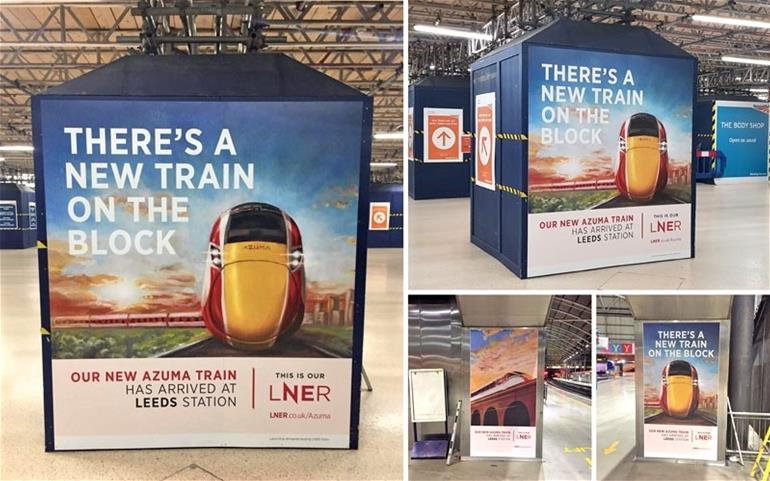 How did people know about it?

LNER and Leeds Train Station had been building anticipation ahead of the launch for the previous months, with advertising throughout the station. We’d been working closely with both organizations to supply them with printed graphics to support this.

The hoardings spread throughout the station as part of its refurbishment provided the ideal backdrop for a series of posters. The poster campaign features images of the new Azuma train in the style of mid-century travel posters. The attractive, colorful designs are immediately eye-catching, particularly when set against the plain backdrops of the station hoardings.

What happened on the launch day?

As the first Azuma train pulled into Leeds Station, it was greeted by crowds on the platform and a brass band. There was a special issue of the Metro running a cover feature and plenty of information on hand for customers to find out about the new trains and services.

There was plenty of press attention and photo opportunities for all the organizations involved. LNER shared some great moments from the day on Twitter and Welcome to Yorkshire was there to capture the train pulling up to the platform.

Wow, just wow! What a fab day it’s been! Our FIRST #Azuma Leeds to London service is about to complete a monumental day for us! Here are a few more pics! #ThisIsOurLNER pic.twitter.com/tPaI7jld3J

Fantastic to see the brand new @LNER Azuma train arriving in Leeds Station. It will mean more trains coming to Yorkshire with even more capacity and getting here faster! Ultimately bringing more people to visit Yorkshire for leisure and business 🚆🙌 #Azuma pic.twitter.com/1cqrAGWPLJ

Although the event will have passed plenty of travelers by, many were pleased to celebrate the further linking of our city with London and the South, as well as Edinburgh and the rest of Scotland. It’s a great recognition of Leeds as one of the business and finance hubs of the North.

Do you have an event or launch to support? Tell us your idea and we’ll help you get your message heard.