On the 1st of September, the FASTSIGNS Goes the Extra Mile (FGTEM) charitable incentive came to an end, following seventeen epic weeks of exercise, team building, fundraising and fun for the FASTSIGNS UK network.

The charitable incentive was borne out of the network-wide desire to support the Simon Cooper Foundation. A charity that had been set up by the franchisees of FASTSIGNS Enfield, Paul and Angela Cooper to continue the legacy of their son, Simon Cooper, who had suffered with cystic fibrosis during his life and sadly passed away in 2016, from cancer.

The foundation aims to raises funds for specialist medical care providers, including hospices associated with cancer, cystic fibrosis and other life limiting conditions. In support of this, the FASTSIGNS Goes the Extra Mile incentive was developed to help raise funds for the foundation. The premise for the activity would include as many of the FASTSIGNS UK centres as possible, each would be allocated a week during the summer to complete a set number of miles. Starting at the most northerly centre in Leeds, each centre would have to cover a minimum of 42.3 miles, snaking down the country to our most southerly centre in Southampton, covering a total distance of 720 miles.

17 of the FASTSIGNS UK centres rose to the challenge and here is how each centre delivered their mileage: 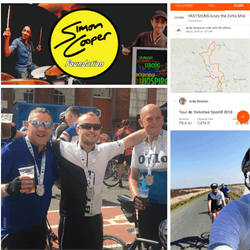 Franchise, Andy Simpson took part in the Tour de Yorkshire cycling 120km in the blistering heat of the May bank holiday! 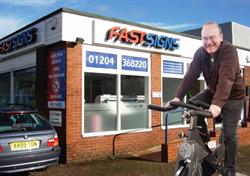 David Hiney's Team at FASTSIGNS Bolton completed their 42 miles by bringing an exercise bike in to the centre, taking turns to reach their target. 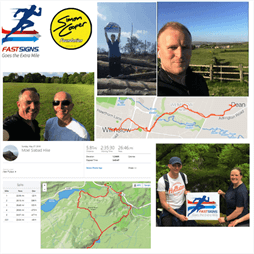 The Manchester team completed a whole host of activities during their week and delivered 60 miles, their activities included: 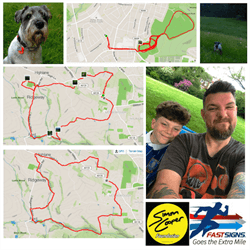 Jason Wilby got his young son, Josh involved taking him on bike rides and leaving the car at home when running errands.

John Brunt added to the millage with extended jogs.

Joint franchisee, Garth Allison worked out on an exercise bike, whilst Paul Allison completed woodland forest walks and climbed Mount le Chat, whilst on holiday in the Alps with his family. 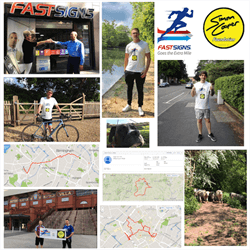 This team produced the first mileage total in excess 100 miles, finishing on a skyscraping 135.63 miles! The Birmingham team pulled together and chipped away at their target by factoring walks, bike rides and even a celebratory team walk at the end of the week, from the oldest pub in Birmingham to the newest.

Franchisee, Janie Drury dedicated herself to walking for the same number of hours as it would take to fly to New York, whilst Martin Drury cycled a gruelling 56 miles for his contribution! 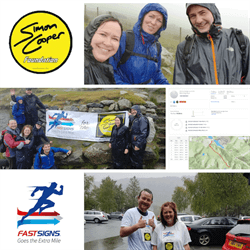 The UK support team climbed to the Mount Snowdon Summit in the fiercest of weather conditions, with consistent driving rain and 45 mph winds, the team reached the summit and delivered a total of 92.26 miles over the week, having completed additional bike rides and runs. 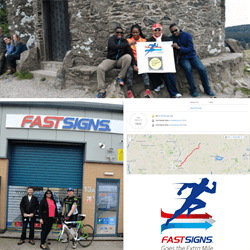 A family affair, Franchisee, Achi, her husband, Akin and their three children enjoyed walks in Brad Gate Park. General Manager, Anthony Brewin also cycled over 40 miles in one day, opting to leave his car at home and completed his commute on just two wheels. In total they delivered a total of 118 miles. 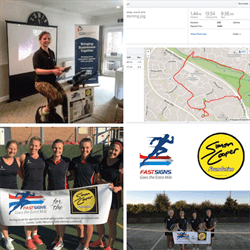 The Gloucester team were inventive when delivering their 78.8 miles. The whole team got involved, fitting in walks on their lunch breaks, taking part in tennis and netball matches and even whilst installing signs! Laura Riddell took the cause to her BNI group and delivered her 15-minute presentation from an exercise bike! Which not only raised miles and funds but also awareness! 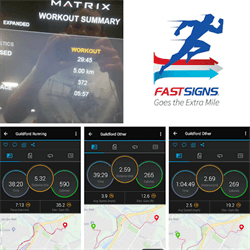 Max Harvey from FASTSIGNS Guildford single-handedly racked up 39 miles during week nine! Max covered this distance by walking to and from work, running, taking his dog for extra long walks and competing in the 10 mile, Tough Mudder challenge. Pretty impressive for one person!

To bump Max's mileage up to the required total, Alan Mclean from the UK support team added a 3.5mile run, ending week nine on 42.5miles. 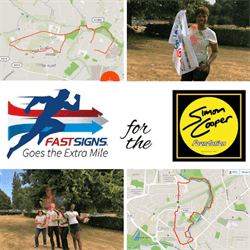 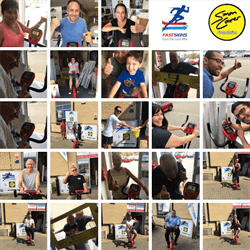 A poignant week for the challenge, franchisees of FASTSIGNS Enfield, Paul and Angela Cooper are the parents of Simon Cooper, who all of this fantastic activity was in aid of! They set up their exercise bike in the car park of their centre, and invited fellow business owners to help them rack up their mileage. With their hard work and neighbour's contributions they delivered a super high mileage of 206 miles! 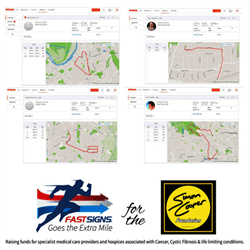 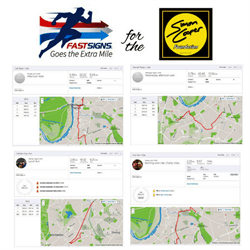 As part of a general health and fitness drive, marketing executive, Hannah Phelps pushed Kingston's miles up by walking to and from work every day, which she does as standard! Hannah was supported by team members Ivett Takas, Nick Mair and Matthew King, who each completed additional runs and walks to help the Kingston centre to reach the required 42 miles. 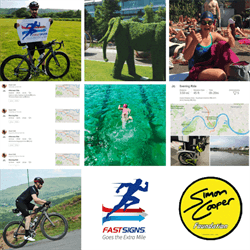 Demonstrating their commitment to the FASTSIGNS Goes the Extra Mile, they hosted their summer BBQ in aid of the Simon Cooper Foundation, encouraging guests to take part in challenges to raise funds. For their physical activity, FASTSIGNS Hammersmith completed a centre triathlon!

Simon, Friederike, Louise, Helen and Nicola were responsible for racking up miles in the water, Petr, Keith, Pajdor and Bartek ran or walked, whilst Joe, Hasan and Seb were on their bikes! In a true team effort, they racked up the highest mileage of the summer, by producing 232.21 miles! 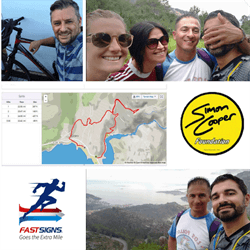 Team members from FASTSIGNS Crawley took FASTSIGNS Goes the Extra Mile to Europe! Whilst holidaying in Spain, Outside Sales Representative, Mel and Production Specialist José, along with José's, brother, Angel and his wife, each walked 3.7 miles up a mountain, which Mel reported to have 30% gradients in places! On home turf, Designer, Alan completed bike rides and overall the Crawley centre finished their week on 63.17 miles. 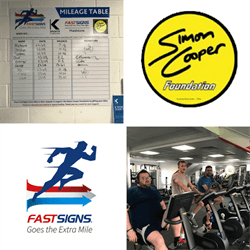 Muhannad Ziyadah’s team at FASTSIGNS Maidstone engaged one of their most loyal customers, K Sports to help them tot up their miles. K Sports gave the team complimentary gym memberships for the week and had full access to gym equipment. Over the week, the team delivered 100.52 miles. 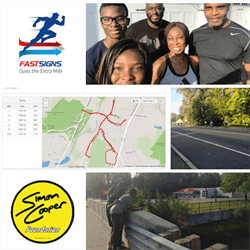 The newest members of the FASTSIGNS network, franchisee Dapo and Ronke Osula completed their activity whilst holidaying in Boston, USA! Getting their family involved they clocked up 59.8miles!

FASTSIGNS Goes the Extra Mile activity has currently raised £3,284.96 for the Simon Cooper Foundation, with more funds still to come in. The network also obliterated our the mileage target finishing on 1,588.32, 120% more than our initial target!

The proceeds from our activity have helped a number of the associations that the Simon Cooper Foundation supports, by contributing to the purchase of the following items:

Overall, the FASTSIGNS Goes the Extra Mile charitable incentive allowed the network to support a charity close to our communal heart, it also encouraged teams to work together, created team building exercises and get back into fitness, which helped to promote health and well being.

If you would like to find out more about the Simon Cooper Foundation, visit their website by clicking here. To donate the charity and in support of FASTSIGNS Goes the Extra Mile, please visit our Virgin Money Giving page by clicking here.